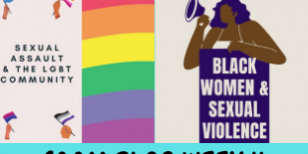 Thank you for following along with our 2021 SAAM journey. We hope we were able to highlight important intersections of Sexual Violence and the different resources that are available. This week we will be focusing on how Sexual Assault impacts the LGBTQ+ community and Black women and Black communities.

What does it mean to move forward after sexual assault? The journey looks differ for everyone. If you find yourself stuck Refuge House is here to support you as you take your own path to healing.

While sexual violence can affect anyone regardless of your background, members of the LGBT+ community will experience sexual violence at similar if not higher rates than straight individuals.

Many members of the LGBT+ community experience high levels of poverty, homelessness, and marginalization, putting them at higher risks of experiencing violence.  They also face high levels of hate-motivated violence, which can sometimes be in the form of sexual assault. For more information, visit Sexual Assault and the LGBTQ Community – HRC

Speaking out about our traumas can be difficult, but for members of the LGBT+ Community, there are other barriers that make it even harder. They may not be out to their friends or family and coming forward would also mean having to tell people before they’re ready. Or perhaps the abuser is also part of the LGBT+ community and speaking up could lead to being outcasted from their community.

The LGBT+ community already faces discrimination and stigmas, so it’s important that we do our best to support them. There are many ways to be an ally, such as educating yourself or even creating safe spaces for LGBT+ members. For more information on how to be an ally, check out Being an Ally to LGBT People | Youth Engaged 4 Change

Within the LGBT+ Community, we also have the trans community, which includes anyone who’s gender identity is different than the one that was assigned at birth. For more information on the gender identity spectrum as well as different terms used, check out Queer and Trans Spectrum Definitions | Student Life | University of Nebraska Omaha (unomaha.edu)

Violence Against the Trans Community

As with most power-based violence, trans individuals are at the highest risk of experiencing sexual assault. About 64% of transgender people have reported experiencing sexual assault in their lifetime and over 54% have experienced some other form of intimate partner violence in their lifetime. Many trans individuals often experience even higher levels of discrimination and marginalization, as well as hate crimes and transphobia. For more information, check out the following links:

In the US, 1 in 5 black women are survivors of rape and 1 in 4 black girls will be sexually assaulted before the age of 18. Black women earning low or no incomes often experience homelessness or live-in housing where they may be at risk for multiple forms of violence. There are additional research studies that find high correlations between low incomes, poverty, sexual violence and or adverse mental health outcomes.

Over half of study participants indicated sexual victimization, and 44% reported sexual coercion when within their lifetime, with approximately 42% reporting both. These are higher prevalence rates than other national survey estimates but, in line with other community-based studies of high-risk populations when face to face interviews are used for data collection.

African American participants with lifetime experiences of rape and/or sexual coercion often have issues with:

What is Systemic Racism?

Systemic racism a form of racism resulting from the inherent biases and prejudices of the policies and practices of social and political organizations, groups, or institutions. It can lead to discrimination in areas such as employment, housing, criminal justice, education, and health care. Black individuals are directly affected by systemic racist practices and policies, making them more likely to experience poverty, unequal access to resources, criminalization, and incarceration. All of these factors help contribute to and exacerbate sexual violence, which is also systemic in nature.