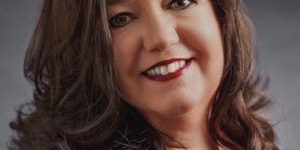 by Marina Brown, Special to the Tallahassee Democrat
April 5, 2021

Birthdays are days for celebrating not only what has passed, but the expectation of what is to come.

That was the case when Tallahassee’s Refuge House, an organization that provides direct services to victims of sexual assault, domestic violence, and to their children and families as well chalked up 43 years of service in Tallahassee and its adjacent counties on Feb. 14, 2021.

And one person who was there to blow out the candles, was the newly appointed Executive Director, Emily Mitchem, who has been with Refuge House for the last 12 years as its Assistant Director.

Able to chronicle the arc of the organization’s involvement in the community, Mitchem says that she hopes to increase its current services, which this year have served over 6000 clients, as well as add new dimensions to the assistance the agency already provides. Meg Baldwin, who was Executive Director for 15 years, retired in 2020.

Begun four decades ago in small house which was indeed a refuge for victims of domestic violence, the organization has grown to include a Prison Counseling Program, a 24-hour Hot Line, a Sexual and Domestic Violence Service Center, two Emergency Shelters, and three sites of Transitional Housing.

Soon, Mitchem says, a new grant from HUD will permit Refuge House to offer vouchers to those in out-lying counties for rental payments for up to six months. “This will allow victims of domestic violence to stay within their own communities, but be away from the site where the abuse took place,” says Mitchem.

Mitchem began her career with much the same focus that she continues today, assisting those whose lives have taken wrong turns and that endangered and often harmed them. “I graduated Florida State University with a degree in Psychology, and my first job was at the Department of Corrections.”

She saw men, who at the time were not often categorized as victims of sexual abuse. Mitchem knew better. And working with individuals with substance-abuse issues, it was clear to her how substance-abuse, domestic violence, sexual exploitation, and prostitution, were activities that tended to overlap one another.

Her goal became, and continues today to be, to offer preventative and interceptive measures to break the looping tragedies of violence and exploitation.

Mitchem came to work at Refuge House over a decade ago while her predecessor, Meg Baldwin was its director. One pet project Mitchem has shepherded are the intervention services offered to children and youth in the agency’s seven county service area.

“Social media literacy is something that every young person should have,” she says. But she doesn’t just refer to the ability to write a clever Tweet or a witty Text. “Refusal skills are vital,” she says.

“For instance, you don’t know how often young middle and high schoolers are asked for nude photos. It is very common. They need to learn how to say ‘no.’” Social media literacy education and intervention in schools, after-school programs, and community centers is currently provided by Refuge House in one-third of middle and high schools, she says.

But doesn’t her life-long focus on what has harmed her clients, and injured both their bodies and their spirits leave her too feeling depressed?

Mitchem offers a resounding “No.” “I see what we do at Refuge House as a massive success story… hundreds of stories. Our success rates are huge. When I’m in a store and someone comes up to me and says, ‘Remember me, you helped me turn my life around…I’ve got an apartment, a car, a job, a family now…’ it is an absolute thrill.”

Mitchem says that it is always one step at a time, but she believes in her clients and their bravery for taking the leap of faith to change their own lives.

While the hotline calls from victims reaching out for assistance and safety had “screeched to a halt” during the height of the pandemic, Mitchem says they have begun to increase as “locked-in” individuals have greater access to privacy and the ability to get to a phone. Refuge House is currently using some Zoom and telephonic interventions as well.

Marina Brown can be contacted at mcdb100@comcast.net.